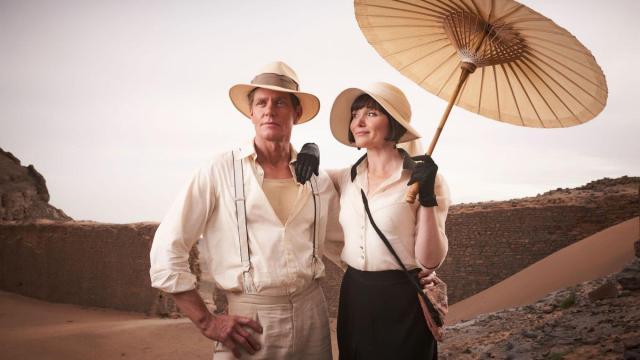 The TV series has garnered significant acclaim, and with good reason. It’s a masterpiece of writing, directing, acting and production. Although it bears little similarity to the book series on which it is based, it is still every bit as enjoyable. It also showcases an unusual female protagonist, who is a woman of independent means and an older age than is normally showcased in the media, but who proves herself to be every bit as energetic and fantastic as her younger counterparts.

The film is an extension of this, which was partially crowd funded by eager fans and came out earlier this year. Alone, the film is a triumph, and showcases the beauty and majesty of the roaring 1920s. The costumes, settings, acting and dialogue are all particularly praiseworthy, with Essie Davies doing a great job as the sartorially perfect titular character.

In comparison to the series, however, it falls significantly flat. There’s no time in the movies runtime, which at an hour and forty odd minutes, is short by comparison to most films nowadays, doesn’t allow for enough time to develop new characters or introduce viewers to the new circumstances of the existing cast members.

There’s also a notable absence of many of the favourite characters from the series, some of whom are only involved briefly at the beginning, which means that we’re hastily introduced to a new cast of characters. As the series relies on a formula, which works impeccably well, the absence of these characters makes it feel a little rushed.

The plot feels especially hastily put together, in comparison to all the splendour of the costumes and the wry wit of dialogue. It begins with the exhilarating rescue of a young woman from a prison in Palestine, which, seemingly kills the lady detective.

As expected, she isn’t dead, and reappears with a flourish in the early scenes of the movie. She and her inspector friend Jack Robinson, who had come to England to attend her memorial alongside the now free prisoner and the Uncle who involved Phryne Fisher in the first place, are quickly thrust into an adventure involving ancient curses, huge gemstones and wars in the Middle East.

The thrills come thick and fast, with Miss Fisher darting about, jumping from trains and throwing herself from rooftops at an alarming rate from the very beginning. Those gripping scenes are enjoyable and bold, but what happens in between isn’t as thrilling as you’d want it to be.

With many nods to the series, this film is great for fans, but newcomers who’ve never heard of Miss Fisher will struggle to understand the hype, as the limited time frame allows for limited development of either existing or new characters. The jokes and character banter have been long established in the series, so you’ll really love some of them if you’re a big fan like me (I laughed out loud at many). This doesn’t make for a great film, however, meaning that many viewers will struggle to get what’s going on. In terms of cinematic prowess, the movie puts costumes and settings ahead of bold camera shots and crisp editing, meaning at times it can look a little amateurish. If you’re a fan, or a big lover of period costumes, then you won’t notice, but if you’re searching for searing cinematic shooting then this isn’t your film. 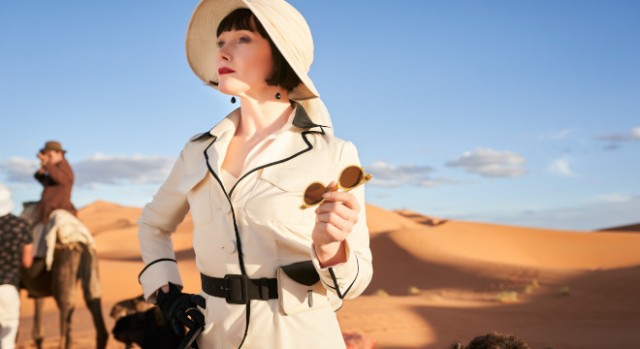 As a standalone crime movie, Miss Fisher And The Crypt Of Tears is interesting, but not particularly well rounded. The plot basically revolves around stopping a curse and finding out who stole cherished jewels from a temple many years ago; unlike most of the series and books, there’s really not masses more to it than that. Usually there are twists and turns all the time, but in the film it’s just a straight line towards the finish point, peppered with a few red herrings and unconvincing threats that don’t really lead anywhere.

Bolstered ancient tombs and the British army’s war in Palestine, as well as a railway deal gone south, the plot meanders around the world with a final twist involving a character we’ve barely seen, and whose involvement is, frankly, preposterous. The result is incredulity from watchers and, honestly, a lack of interest in the overall outcome.

Once the perpetrators have been revelled and the full extend of the banality is out in the open, I was bored and sad that the movie hadn’t turned out to be the masterpiece that I’ve been waiting for. I still love it, particularly as it continues to showcase masterful acting from Davis and Nathan Page, who plays Jack Robinson, but it didn’t turn out as great on its own as I would’ve liked.

So, in ending my second ever film review, I just have to say that I again have a similar opinion of this as I did Kenneth Branagh’s version of Murder On The Orient Express: while this looks like Miss Fisher, it most certainly isn’t the same. Turning a series as great as this into a film changes it fundamentally, and in many cases not for the better.

While this film is an intriguing concept and interesting story, which has been exquisitely executed, I’d like to see the series return again, rather than a feature length sequel. Miss Fisher And The Crypt Of Tears isn’t a fitting end to the Miss Fisher franchise, so I sincerely hope there’s more. Thankfully, the cliff-hanger at the end of the film suggests that there will be; with any luck we’ll get a forth series, not another film.

One thought on “Miss Fisher And The Crypt Of Tears Review: Fans Will Love It, But If You’re New Then Don’t Let This Be Your Introduction”