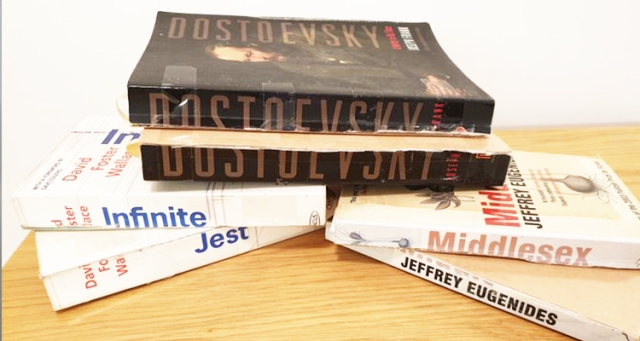 Following on from the revelation that an actual author, no less, slices thick books in half to ‘make them more portable’, many people were, rightly, outraged.

Then some news outlets started to defend this madness and state that it was fine to rip books in half if you want to.

Books might just be objects to some people, but for the majority of the population they are important learning tools that contain valuable information. The authors, publishers, illustrators and the rest of those involved in book production all worked very hard to create those books. It’s disrespectful to them for people to be chopping them in two, be it for portability or any other reason.

Also, it’s important that we set a good example to children and anyone else who needs to be encouraged to read more. You need to show others, particularly the young, that books and knowledge are something to be cherished and treasured.

Throughout history, book burning has been a traditional way of ridding cultures of works deemed ‘undesirable’ to the reigning regime for hundreds of years, and cutting books in two shows them as much disrespect as chucking them onto a roaring fire. It makes the knowledge in them appear worthless and gives others the idea that treating books poorly is the way we can regard the information contained within their pages.

That doesn’t mean you have to be perfect. If you’re a fan of folding down your pages to mark your place then that’s all good. You don’t have to keep your books pristine and in a little plastic overcoat like they do at libraries. Wear and tear is a vital part of the lifecycle of any book. You can keep them however you like, just don’t utterly disrespect them by cutting them in half.

This process disrespects the books, shows that you have no regard for anyone involved in creating them and ruins your enjoyment of the books themselves. It’s hard to really get your teeth into a book when it’s been sawed clean in two.

In summary, I would strongly urge anyone who is considering cutting books into pieces, be it for the sake of portability, being funny or simply going viral, to stop and take a long hard look at themselves. They might soon realise that what’s looking back at them is not the genius they thought they were, but in fact an ignorant human being who shouldn’t be behaving in such an uncouth way.

Stop mutilating books, be it for the sake of expediency or, as I suspect is the case here, for likes on social media. Such popularity is fleeting, but the knowledge, insight and sheer joy that books impart can last a lifetime.

2 thoughts on “Cutting Books In Half: It’s Not OK”