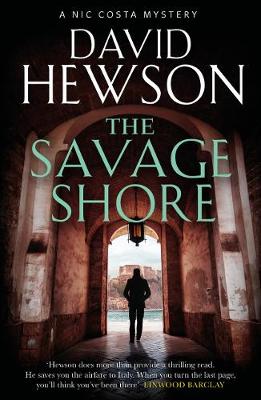 Having previously participated in David Hewson’s blog tour in which I interviewed him about his work, I felt it was only right that I also review his latest novel, The Savage Shore, and give you my honest thoughts on the book.

It’s one of the early publications of a new publishing imprint, Black Thorn Books, and is part of Hewson’s longstanding Nic Costa series about the search for the truth in the heart of Italy.

Throughout Hewson’s series, which spans nearly ten books and is back after a break of a decade, Costa and his team have explored the history, culture and politics of Italy in search of the criminals behind a string of diabolical crimes.

In this latest incarnation, The Savage Shore, Costa has to infiltrate a ruthless and deadly mafia organisation with the help of a turncoat witness who may very well have his own agenda. In an unfamiliar location with a fake identity, Costa is surrounded by enemies and in grave danger.

The novel has that perfect blend of pace; fast, but with enough time to describe the scenery and evoke a sense of setting for the reader. Hewson’s work has the advantage of being set in the beautiful and evocative Italy, rather than somewhere grim and dank, like Scunthorpe, but the author’s exquisite sense of timing and sumptuous descriptions shine through none the less.

With everything from intrigue and lies through to murder and threats on the table, this ingenious thriller grips the reader from the beginning and draws them in to the elite yet frightening world of organised crime in which Costa now finds himself operating as he works with the head of a notoriously brutal branch of the mafia to unravel the organisation from the inside.

In short, this is a really concise, ingenuous thriller that leaves no doubt in my mind that Black Thorn Books has bloody good taste.

2 thoughts on “The Savage Shore Review: An Enchanting and Gripping Thriller”