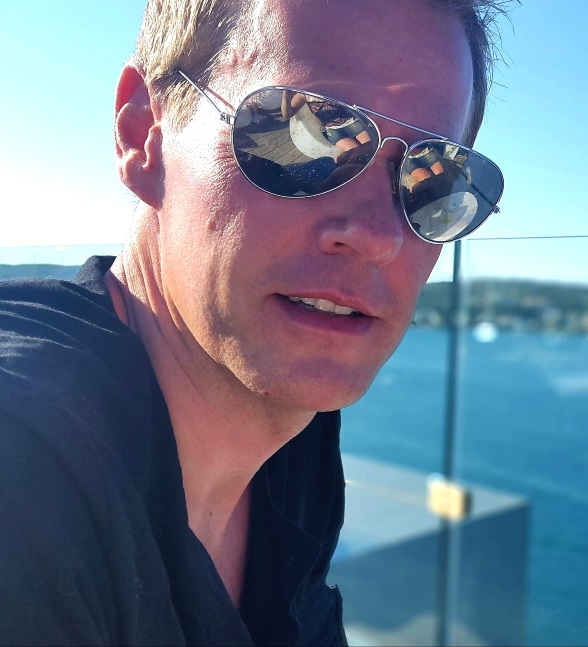 For my first interview of 2019 (how exciting!) I spoke to Andrew Thompson, author of dark comedy Pettifyr on the Rocks.

Tell me about your books. What drew you towards writing dark comedies?

Pettifyr on the Rocks is my first novel and (getting this out there up front) it is supposed to be a funny book. I never intended it to be a ‘serious’ thriller and it doesn’t take itself too seriously. The plotting here is so wafer-thin that you’ll get a paper cut from the Kindle edition…

That said, it is a warm-hearted little story from someone who has always had a deep love for the so-called ‘golden age’ of English crime thrillers (especially Agatha Christie and Margery Allingham) and the old black and white Sherlock Holmes and Charlie Chan movies that I adored sitting in front of on TV when I came home from school. I remember sitting in the dark watching the old Miss Marple movies with Margaret Rutherford and the Basil Rathbone Holmes films. I love all of those old movies, plus the James Bond and Humphrey Bogart films. Hitchcock too.

I wanted to write something that reminded me of those old books and films I loved as a kid, but with a twist and something of myself in it. Something that had the feel of a classic old paperback Leslie Charteris or something that you might pick up from a hotel bookshelf. I wanted it to be uncomplicated, funny and, perhaps most importantly, warm and engaging. Mainly I needed to get Jennifer out of my head. She’s been banging away at my frontal lobe for a long time and it is nice, finally, to have her out in the world and doing something quasi-useful. By ‘quasi-useful’ I obviously mean drinking too much, swearing like a docker with a bee-sting and basically blundering about.

If I had tried to write a ‘straight’ thriller it would be rubbish. I don’t have the brain for complex plotting or the interest in creating a world of pain and suffering for a psychological thriller. I’d rather try to create something that made someone laugh on the train and then tell their friends that ‘it’s utterly stupid, but quite funny’. If this book (and Jennifer) makes people smile then I will have achieved my goal.

What is your background and how did you get in to writing?

Most of the time I’m just a dull little office worker, staring out across an ocean of an open-plan room populated by banks of humans with computer screens. I’ve started writing, I think, as a bit of a reaction to that. Don’t get me wrong, large organisations are not inherently dull places because they are, at the end of the day, populated by people and people come in all shapes and sizes. It is easy to look around, though, and feel that your life is passing you by.

I’m also a musician and played in a band in the mid-noughties, so I’ve done a few different things and have moved around quite a lot geographically. The most honest answer is that I’ve spent most of my life living inside my own head and writing has given me an outlet to create something that is entirely my own but also stands entirely apart from me. The idea that you can create a world, and characters, that other people can enjoy when you are not there is extremely compelling. In short, I guess these books are about my need to create something. Jennifer has been knocking on the front door of my head, with increasing persistence, for a long time.

Please tell me about your books. What sets them apart from other similar novels?

Pettifyr on the Rocks is the first in a planned series centred around flame-haired, foul-mouthed investigator Jennifer Pettifyr, whose primary skill-set revolves around drinking, swearing, punching people and generally making a nuisance of herself. As to what sets my books apart from others- apart from the weak prose and poor plotting, obviously- that’s not really for me to say. Jennifer does pop to the toilet on a reasonably regular basis (my mother first pointed this out, so I deliberately put more pit-stops into the books now just to wind her up). Surely that’s a bit of a breakthrough in British crime fiction? Does it interrupt the narrative flow? I think it’s integral. The flow, you might say, is integral.

Jennifer herself is an investigator of the unexplained whose services are used occasionally by the Government as and when they have problems requiring a bit of unofficial nose poking. She is in her very late-twenties, does like a bit of a drink (who doesn’t?) and loves a good board game. The stories are set, very loosely, around the very late 1980s but are deliberately vague about this. I want them to feel quite timeless in terms of setting. She’s a strong girl, very sporty and well capable of looking after herself. She gets stuck in and gets stuff done. Despite some emotional frailties, I hope that Jennifer is a good role model for young women everywhere. That is what I wanted her to be, above all other things. Other than for her language, of course. Her language is bloody dreadful.

Tell me about the books you personally write. Where do you find your inspiration?

Jennifer Pettifyr, who is occupying all of my writing, is a horrible little hybrid of various different people. Her flame hair is pure Amanda Fitton. I loved those books. Her outlook on life, sadly for all of us, is closer to Romesh Ranganathan.

She drinks too much, swears too much, has a first-class honours degree in sarcasm and a heart as big as a pork pie on steroids. Her ability to veer off at random into chatting shit for Britain (and insisting on a ‘final wee’ despite only being five minutes from wherever she is going) is entirely my wife. She does this ALL the time. I’ve mentioned my love of old film noir, thrillers and potboilers already and those are a massive influence and inspiration for me, as are comedies such as Withnail & I, The League of Gentlemen and Blackadder.

On a more serious note, I am also drawn to the more romantic style of mystery fiction for its pure escapism. I do find it depressing that so many thrillers and masses of suspense fiction seems to revolve around physical and sexual violence towards women. The serial killer performing increasingly horrific acts in order to generate tension. There are dark scenes in my books but, fundamentally, that isn’t what I want to write about and others are far better at it than I could ever be. People suffer and die every day in real life. With a book, I can do something about it. I can stop it happening to someone. You can do anything at all in a book. I’d rather use my time to attempt to create someone who, although flawed, tries her very best to help people and always to do the right thing. That’s Jennifer. She may pop to the loo, but she’s definitely got your back. When she’s not in the loo. She’s like an awkward Simon Templar. That’s who she is.

As for Jennifer’s annoying sarcasm, that’s just me after a few G&Ts. A work colleague called me ‘sassy’ last week on a night out. I don’t know many 6’ 4” males who get branded as ‘sassy’. I was inordinately pleased. As for Jennifer’s swearing, just spend an hour in the Essex Arms in Brentwood and you’ll realise that, in fact, she hardly swears at all. Seriously, that pub is an education in the use of the four-letter word. Also, they show the footie and the train times. Great off-licence across the road too (big shout out to Elaine here).

I’d love to buy Adam Diment a drink and thank him for the Philip McAlpine books. If I could ever write anything even 10% as perfect as those I’d die a happy man. As for collaborating, I’ll just sit back in an armchair with a nice glass of red and let him crack on. He wouldn’t need my help. I took The Dolly Dolly Spy on holiday for six summers on the bounce. Just re-read it over and over. It never got old. The pages fell out eventually; I read that book so much. At the end, only the suntan lotion was holding it together.

I’m working on the second Jennifer Pettifyr book right now and it’s entertaining me immensely. The idea for it came to me from watching an old episode of The Avengers and it gave me the perfect idea for getting into Jennifer’s family and a bit more of what makes her tick (which is hinted at in the first book but not really explored at all). I’m very excited about it, as it is shaping up to be (a) much funnier than the first one and (b) almost competently written. Almost. If you scrunch up your eyes and squint at it.

I’m quite dreadful for the lack of diversity in my reading habits! The trouble with having a full-time job (other than people giving you stuff to do… I mean, what’s that all about?) is that I don’t have a lot of reading time. To be honest, I generally end up reading a mixture of big-name authors (if they aren’t up their own backsides) plus anything random, unusual or interesting, which could be anything really. I read a lot of old thrillers when I can (my guilty pleasure is old second/third/however many-hand paperbacks from authors I’ve never heard of). I really loved the Glass Books trilogy. I loved Magpie Murders (Anthony Horowitz). The problem is, when I read other books it reminds me that, well, I’m just not up to the job…

Pettifyr on the Rocks is available for pre-order on Amazon Kindle now. Link through the website www.pettifyr.biz. Paperback option through Amazon to follow shortly.

Also, and this is very important, thank you so much for asking me! If you want me to expand on or clarify anything please just let me know.

Thank you for your time, I’ve thoroughly enjoyed hearing your thoughts and learning more about your writing!