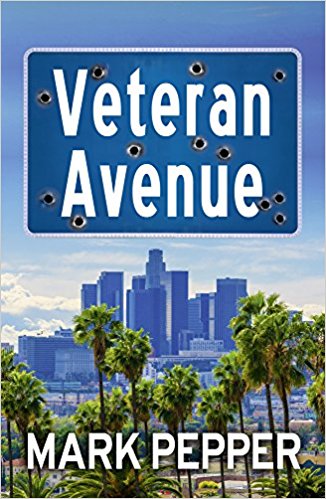 Mark Pepper’s action packed thriller invokes an almost Raymond Chandler-esq, telling the tale of a former solider whose past clashes violently with his present as he travels to America for the funeral of a fellow veteran. Years earlier, as a child, he is befriended by a stranger in the Oregon wilderness and stolen away from his parents. After a bizarre hour spent in a log cabin, he is sent back with a picture of a young girl. It is this chilling event that returns to haunt this haunted veteran as he tries to untangle an incredibly complex web of malice, deceit and violence.

Protagonist John Frears is a drifter with a tough exterior and an interesting host of friends and acquaintances. The novel’s whole cast of characters are interesting and varied, with strong dialogue that makes this a really easy book to devour. The story is punchy and fast paced. Author Mark Pepper is also an actor alongside being a writer, and this shows in the novel; the plot is driven by dialogue, eliminating the issue of info dumping, which can often ruin thrillers.

The one thing that grates on me is the names; whilst the dialogue helps enhance the American setting and gives the novel an almost wild-western feel, the strange names, such as Roth, Dodge and Hawg, are too over the top, and give this otherwise fascinating and well crafted novel a comical, almost slapstick feel which does not suit it.

With its quick witted dialogue, engaging characters and well-driven narrative, Veteran Avenue is a great thriller that readers will struggle to put down. I found myself on the verge of reading it again once I’d finished, as I was so entranced by Pepper’s portrayal of John’s adventures.

One thought on “Veteran Avenue Review: A Real Old-School Thriller in a Modern Setting”