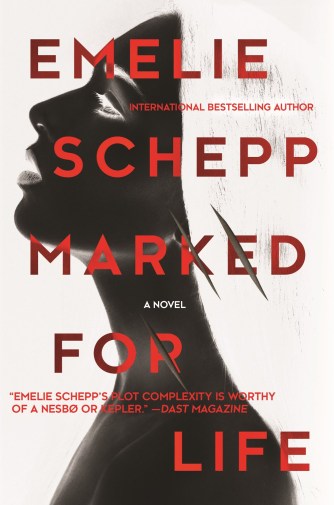 Emelie Schepp’s debut novel is a thrilling study in Nordic Noir, encapsulating the very best attributes from the genre. With a Mankell-esq eye for detail and a gruesome and depraved plot, this novel contains every genre troupe that has made Nordic crime fiction so successful across the world, including corrupt officials, dark and haunting settings and blunt, often unflattering characterisation.

In fact it is Schepp’s commitment to creating characters that are both completely repulsive and entirely relatable that really sets this novel apart. Her key protagonist, Public Prosecutor Jana Berzelius, is intriguing and surprising right from the start, and the motley crew of Police Officers and Forensic Experts she works with highlight the full spectrum of human emotion and sensibility. Encompassing a broad range of themes, including sexual violence, misogyny, the abuse of power and the desperation of the victims of the illegal trade in people, Marked for Life skilfully combines social criticism and crime fiction in a way that hasn’t been properly achieved since Stieg Larsson’s Millennium trilogy.

The case appears, initially, to be relatively straightforward. Head of the Migration Board Hans Juhlén has been shot dead in his own home, his body discovered by a distraught wife whose hysterical story quickly unravels, revealing both motive and opportunity, as well as sheading light on the lies and deception which permeate through the façade of the Juhléns’ supposedly perfect domestic lives. As the stoic head of the investigation Gunnar Öhrn comes to believe that the case may be solved, despite the cryptic presence of a child’s handprint in a childless household, the case takes an unexpected turn, as the body of a young boy washes up with an indisputable link to Juhlén’s death.

From thereon in Schepp showcases her skill at plotting, with the novel containing many skilfully implemented twists. The dark themes of the novel are complemented perfects by the author’s blunt, measured descriptions, with every detail presented to the reader, from the brand of clothes the detectives wear to the exact time at which each major event occurs. This creates a taut, brisk narrative that conveys perfectly the novel’s brilliant and harrowing plot.

Overall this is a stunning display of literary skill, and is the perfect debut novel. There is clearly much more to come from this talented author, and she is definitely one to watch. The novel has been compared to the works of many talented and revered Scandinavian crime writers, including Jo Nesbø and Lars Kepler as it states proudly on the book’s cover, but I would argue that Marked for Life in fact takes many of the best traits from the best across the genre, creating a book close to perfect which is definitely not to be missed.

One thought on “Marked for Life Review”